Did you know that all beer is either a lager or an ale? This is the most important distinction of beer and all beer styles fall into one of these two categories.

Many people are confused about the difference between ale and lager. Labels are often misleading. Laws in certain jurisdictions conflict with the true definition, and myths still exist.

Almost all beer can be considered either ale or a lager. There are a very few exceptions which will also be defined. Ales have been around thousands of years, much longer than lagers which really did not exist until the 16th century.

You may be thinking, “man, all my life I thought I was drinking lager, but if ale has such a long history, I guess I was really drinking ale”. Well, you probably are not wrong, unless you lived in the UK. Since the beginning of the 20th century (which started Jan 1, 1901), lager production pretty much completely surpassed ale production worldwide. In fact, in the United Kingdom, the last bastion of ale drinkers, lager consumption surpassed ale consumption for the first time in 1997 (Informa Economics, 1998).

Well let’s set the record straight, and yes there was a hint above. I will start by defining what defines ales and lagers. Well… drum roll please….. it is the yeast and the fermentation temperature. It is as simple as that. Oh…, you want more!

No one really knows when beer was first created, but archaeologists have found evidence of brewing as far back as 2650 BC in Mesopotamia (modern day Iraq). Other archaeological records show the Picts of Scotland brewing fermented beverages 6500 years ago. The only thing for sure is beer happens, it is a natural process and there was probably no single point in time when beer could be said to be “created”.

What is beer really?

One thing needs to be defined before we get carried away here. What is beer? It seems like a simple question, but there are many misconceptions out there. Well again, it really is easy to answer, beer is any fermented beverage made from cereal grains. This means that sake is really a beer (although wine people may consider it a wine it is not). Different cultures used different grains, it really depended upon what was available to them. Africans made beer out of millet and corn. China used wheat and other parts of Asia used sorghum. Russians used rye, and finally the Egyptians grew barley specifically for brewing.

One reason for the confusion between ale and lager comes from the early days of brewing. Historically any product made with hops was called beer, and any product made without hops was called ale. Wait a minute I hear you saying “I thought that beer was made from only 4 ingredients; barley, hops, water, and yeast”. Well again you are correct but only since the advent of the Reinheitsgebot or German Purity Law which was adopted in 1516. Outside of Germany many brewers used plants and herbs to bitter their beer and also claim medicinal properties. So you could argue that the Reinheitsgebot is the oldest consumer protection law in the world, and yes it is still in place, although it has been modified to include wheat.

Ale is fermented at warmer temperatures, usually defined as 64º – 72ºF (18º – 22º C). For the microbiologists among you, the genus and species identified with ale fermentation is Saccharomyces cerevisiae. The yeast used for brewing ales has been selected for creating a balance between temp and taste. Ale yeast is often called top-fermenting. This does not mean the yeast are only fermenting at the top, only that the temperature of the wort (malt liquid) makes the yeast want to gather towards the top of the fermentation vessel.

Pale Ale or Bitter: These are styles derived from British pub ales. Generally the British styles would have less bitterness than an American version, and bitter is really a relative term (i.e. more bitter than milds or brown ales).

India Pale Ale (IPA): Historically, India pale ale was brewed with more alcohol and hops to survive the long voyage from England to India. Many English versions of pale ale are incorrectly marketed as India pale ale, alcohol content and bitterness should be your guide. American IPA is simply an adaptation of the English version using American ingredients and of course American attitude, more hops and more alcohol. There is also a new style, mainly American brewed, called Imperial IPA. This is even stronger and bitterer than regular IPA.

Belgian Beers: There are many different styles of Belgian beer and almost all of them are ales. From the monastery tradition comes dubbel and tripel styles. The Senne Valley produces lambic and the French border region produces Saison and Bière de Garde. An entire book could be written about Belgium’s very rich beer culture and I leave it as an exercise for the reader to seek out these truly unique beers. 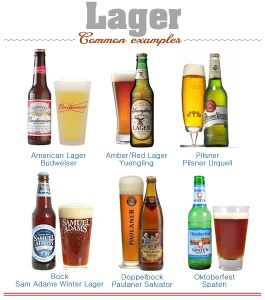 Lager is fermented at much cooler temperatures than ale, usually 40º – 55ºF (4º – 13ºC). Lager yeast is of the same genus as ale yeast, Saccharomyces, but the species is different, carlsbergensis. Yes, the species was named for the famous Carlsberg brewery which isolated the lager species. Lager yeast is called bottom fermenting because the yeast tends to gather at the bottom of the fermentation vessel. Again, fermentation happens all throughout the wort, but the yeast just prefers to hang out at the bottom of the vessel.

Unlike ale yeast, lager yeast has been adapted to these lower temperatures and if fermented at the higher ale temperatures would create a beer with many off-flavors. This is due to the lager yeast metabolizing the malt sugars at an accelerated rate; not allowing the yeast to reabsorb its by-products. The one exception to this is the hybrid yeast styles discussed below.

Pilsner and Lager: Both of these styles are very similar. Pale golden color and crisp, clean flavors. The major difference between the two styles is the level of bitterness. Lagers are malt accentuated beers whereas pilsner is balanced on the hop bitterness side and is a little dryer finishing. Both of these styles can be broken down even further. Lager can be divided into American lagers, Munich helles, and Dortmunder export. Pilsner can be divided into German pilsner and Bohemian (Czechoslovakian) pilsener. There is also an American pilsner, but very few commercial examples exist today.

Amber and Dark Lager: Originally all beers were dark color due to the way barley was malted. Lager was no exception. Amber lagers include Vienna lager and Oktoberfest/Märzen. Vienna lager was invented by Anton Dreher in 1841 and when Gabriel Sedlmayr adapted the recipe for the Spaten brewery, Oktoberfest/Märzen was born. Dark lager on the other hand has a much older history. Remember Bavarian helles from above? Well Bavarian helles was adapted from Munich dunkel, a dark brown, bready and complex lager. Schwarzbier is the darkest of the lagers and translates to black beer. Schwarzbier has more roasted malt flavor and hop bitterness than dunkel.

Negra Modelo is the classic style for Vienna lager, but lately has been using adjuncts and is not as good as it used to be. Spaten Oktoberfest is the original but many consider the Paulaner version more authentic in this day and age of large commercial brewing. Dunkel is also hard to find outside of Germany, but Reutberger Kloster-Biere has an export dunkel as well as Gordon Biersch Dunkels. It is hard to find authentic commercial examples of Schwarzbier outside of Germany Sprecher Black Bavarian and Sapporo Black Beer are good examples.

Bock: Bock beers originated in Einbeck, Germany and are stronger beers than one would normally drink and were originally exported (hence their strength). Four principal styles of bock exist. Maibock or helles bock is a stronger version of a helles and is often drunk in the springtime. Traditional bock is darker and full of bready and malty notes with some fruitiness from the malt as opposed to fermentation. Doppelbock was created in Munich and is a strong, sweet beer sometimes called liquid bread. Doppelbock names often end in “-ator”. Eisbock is considered a distilled product in the United States. Eisbock is made by freezing a bock beer and then removing the ice. This is technically distilling because water is taken out of the beer. This leaves a full bodied and malty beer with considerable alcohol.

Ayinger Maibock and Hofbräu Maibock are excellent examples of maibock. Einbecker Ur-Bock Dunkel is the original and still the best example of traditional bock. Spaten Optimator and Weihenstephaner Korbinian are classic examples of doppelbock. Samichlaus is the world’s strongest lager and is also a doppelbock, albeit at the extreme range of the alcohol range (15% ABV). Kulmbacher Reichelbräu Eisbock is the best example of eisbock although other examples do exist.

Hybrid beers represent a unique example of brewing.  Most hybrid beers originated as a result of brewers fermenting with a yeast strain that is most effectively employed at a very different temperature. California Common Beer was created with a lager strain that was fermented in sunny, warm California, while German Altbiers and Kölsch was first brewed with ale strains in chilly Northern Europe.

The best way to start to get to know all of the different styles of beer is to just jump in and start tasting.

More on that right here: